I am happy to see that my very own town of San Jose is innovating by becoming the first city in the USA which requires gun owners to purchase crime liability insurance! This is an insurance policy that pays out to victims if the policy owner commits a crime, just like how car insurance works. As the article says, “The liability insurance would cover losses or damages resulting from any negligent or accidental use of the firearm, including death, injury or property damage, according to the ordinance. If a gun is stolen or lost, the owner of the firearm would be considered liable until the theft or loss is reported to authorities.”

If this experiment works out and the liability insurance system isn’t too burdensome, I wonder if someday we could actually require everyone to carry crime liability insurance! Everyone would have to pay at least a small premium, and premiums would be higher for people at a higher risk of committing crimes (ie, men, young people, people with a history of prior offenses, etc), just like how car insurance costs more for new drivers. But the upside might be a higher-trust society, where people could be friendlier and more open to strangers because crimes are less common (and when they do happen victims are more often properly compensated). Here is philosopher/economist Robin Hanson with more details on this utopian and/or dystopian scheme.

This would hopefully work just like how car insurance helps create an atmosphere of greater trust, safety, and social equality on the roads – without mandatory car insurance, we might become fearful of financially-poor drivers who couldn’t afford to pay our medical bills if they hit us. And people might drive more dangerously in general if they weren’t afraid that small incidents might cause their premiums to increase.

The dream libertarian city of Prospera is planning to require crime liability insurance as a condition of citizenship, so that everyone in the city knows that all the other citizens are people of good standing who at least are able to persuade some insurance company to vouch for them. Crime is a huge problem in “murder capital of the world” Honduras where Prospera is located, so creating a healthy high-trust environment without creating an oppressive police state is a very important design goal for libertarian Prospera! By contrast, a different and less-libertarian Honduran charter city, ‘Ciudad Morzan’, is going for the more traditional “private security / gated community surveillance state” approach to creating a low-crime environment. Still nice to give Hondurans choices, I guess – infinitely better to be living in an optional police-state neighborhood than a mandatory police-state society! 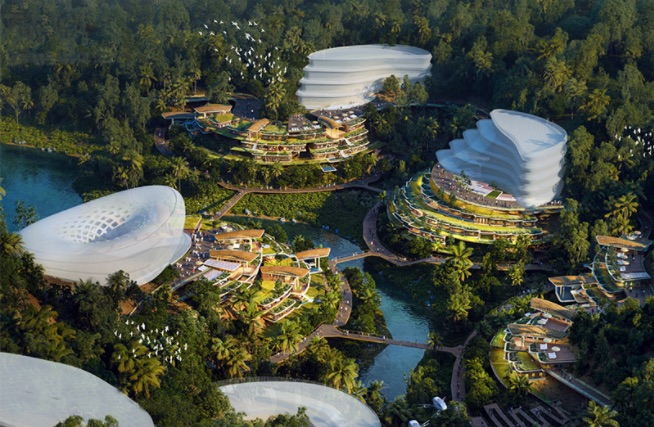 Prospera has a lot of cool solarpunk concept art, and they have a real legal framework granted by the Honduran constitution that allows them to mostly pass their own crazy utopian laws – universal crime liability insurance is only like the 18th weirdest thing about Prospera– but currently it is still early days for them; they probably only have about 100 residents at the moment, more like a remote-work-themed hotel than a city.

Anyways, in an absolute best-case scenario, the idea of crime liability insurance would be a relatively light-touch system which could restore some of the friendliness and high trust of tight-knit traditional communities (think of a small village in sweden or japan) even to huge, dynamic, diverse cities full of strangers and radically different levels of wealth (like New York City), allowing us to have the best of both worlds, diversity & trust together! Plus of course less actual crime and more justice for victims.

In a worst-case scenario, the idea maybe just doesn’t really do anything, or maybe it can only work by becoming an obtrusive corporate-run surveillance state which is only somewhat of an improvement over just having a traditional government-run surveillance state. Also, the big benefit I’m imagining is that while some people would have to pay higher premiums than others, in exchange social discrimination would go down because everyone could be more confident in their fellow citizens. But maybe that doesn’t work, and now we’re just making people pay premiums but discrimination against minorities and aversion from poor people is as bad as ever. I’m not married to the belief that this reform idea is a sure winner!

IRL, even a universal crime-liability law would probably not transform our world into a utopia or dystopia overnight, but would just have a tiny 5% effect either in a positive or negative direction. Still potentially a big deal though – driving would be quite a bit different if car insurance didn’t exist, and crime liability insurance would influence all parts of life instead of just driving.

Anyways, I am always happy to see more experimentation in the generally stagnant worlds of law and institution-design. I’m doubly happy that San Jose is leading the way on this, which is befitting of the forward-thinking progressive image that California & Silicon Valley aspire to. Starting with gun owners is a logical population to run a small-scale experiment on, and it’s also nice to finally see some movement & innovation on gun control in particular, which is so infamously stuck in cultural trench-warfare.