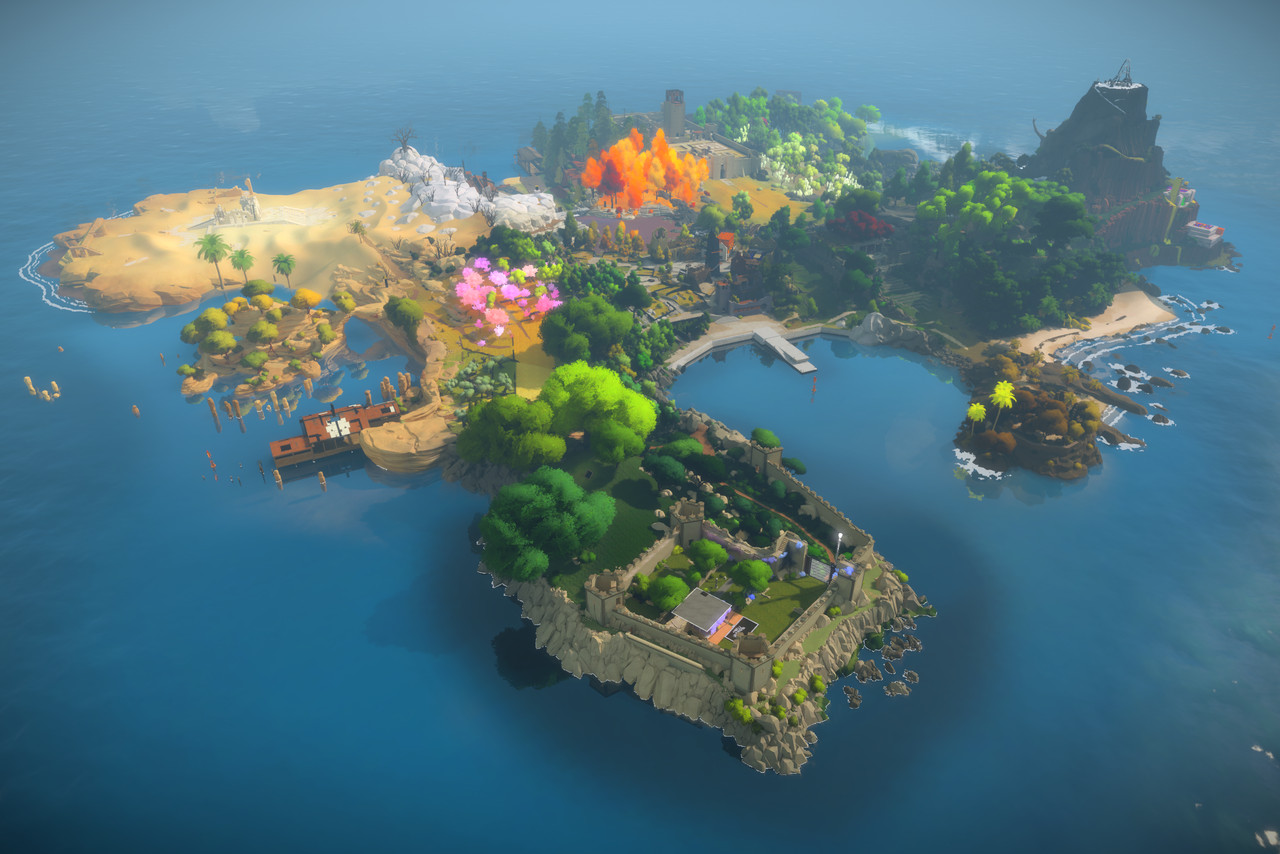 The Witness is certainly my favorite videogame, perhaps my all-time favorite piece of media. It’s a 3D, first-person exploration game set on a beautiful island full of fascinating, delightful puzzles about geometry, perception, color, and symmetry. The game is widely acclaimed for those qualities, but the most unique and entrancing thing about The Witness is the way it communicates complex philosophical themes. This is a game composed of thousands of interconnected ideas – it’s a game about sensory perception, game design, free will, meditation, the project of civilization, the art of rationality, and more. (If you’ve read Godel, Escher, Bach, it’s a bit like that, except as an immersive explorable museum.) But it might be fair to say that at its core, The Witness is about how humans obtain/assemble knowledge about the world, and about the relationship between first-person conscious experience and the objective physical world described by scientific law.

While The Witness is highly critically acclaimed, it seems to me that the game is often quite poorly understood. I’m an avid collector of fan theories, essays, videos, etc, but a lot of other analysis stays at a fairly shallow level. Journalist’s articles briefly gesture towards a simple, sweeping thesis for what the entire game “means”, while most fan content has focused primarily on esoteric late-game secrets and easter eggs.

With my longplay video series, “Examining The Witness”, I aim to dig deep into the interplay of ideas that weaves through each area’s puzzle design, audio logs, art, etc, examining all the ways that The Witness communicates and reinforces its complex heirarchy of related ideas. Since the resulting videos are long and only semi-structured, I’ve included “highlights” in each video description, which take you right to the most interesting stuff I have to say. Bolded highlights are my best moments.

Spoiler warning! The Witness famously has a huge, very unique suprise that is easy to spoil. If you haven’t played the game but someday intend to, stick to just my first, spoiler-free episode. Even if you normally don’t mind plot spoilers, The Witness is quite different – this is something that you really want to experience firsthand.

For this first episode only, I’m taking a no-spoilers approach, examining how The Witness guides the experience of a new player during the introductory part of the game, starting in the castle garden and then into the tutorial puzzle-sequences in the agricultural area.

(From this episode onwards, the series is going full-spoilers. Watch out!) In this second episode, we’re strolling through the beautiful Symmetry area, encountering our first “environmental puzzle”, and talking about how the obvious reflections and duplications of the symmetry puzzles have things to say about the subtler themes of categorization, division, and dualism vs monism that frequently crop up other parts of The Witness.

(An especially spoilery episode about end-game secrets, but also a really good episode IMO.) In this third episode, we’re talking about spoilers, secrets, and special details hidden in the introductory area of the castle, including the symbolism behind some of the game’s most powerful environmental puzzles.

(About the optics puzzles of the desert sun temple, and the ancient civilization that first lived on the Island. Plus, a detailed discussion of the fascinating Feynman video.)

The desert ruins, fortress keep, and zen monastery were all built by pre-modern civilizations living on the island. Each structure embodies the philosophy of the people who built it, and contains unique gameplay mechanics that comment on the themes of that particular area. In this and the next two episodes of ‘Examining The Witness’, we’ll analyze the distinct perspectives of these relatively self-contained mid-game locations, seeing how they add complexity and depth to the game’s core overarching message.

The “reflection” theme of this area is in some ways an elaboration of and 3-dimensional sequel to the “symmetry” puzzles encountered earlier. (For instance, it continues the yellow/cyan color theming of the symmetry area, but with darker shades of orange/blue.) It also represents an interesting cross-over point between the logic-symbol-on-the-panel puzzles and the clue-hidden-in-the-environment puzzles. The reflection “clues” exist in the environment outside the panel, but these reflections are based on rigid laws of geometry – in some ways more similar to the logic-symbol puzzles than to the contrived, careful placement of physical objects in the apple orchard, monastery, etc.

Thematically, the Sun Temple represents the philosophy of ancient peoples who lived during the birth of civilization. These people were the first to harness scientific knowledge, like astronomy and optics, to answer questions about our place in the universe. They were also entranced by an understanding of metaphor, representation, and abstraction, hence their obsession with reflections of the sun and some very “meta” reflective carvings depicting reflective carvings.

Located on a distant, lonely, barren corner of the Island (as far as possible from the Mountain which represents the culmination of the Island’s advanced technological civilization), surrounded by raw stone that looks like it either has just emerged from the primordial ocean or (more plausibly) is about to erode back into the sea, a desert Vault contains a video with two clips from the famous quantum physicist Richard Feynman. These clips are essential for understanding The Witness – they establish both the mindset of wide-eyed curiosity that The Witness considers an essential starting point for exploration, and the idea of connections between heirarchies of knowledge that provides a framework for the basic game design of The Witness.

A Fortress of Dualities

(How “The Keep” uses game design to express the tension between two equally-true but seemingly-irreconcilable ways of viewing human society.)

With more statues than almost anywhere else on the Island, the Fortress has a lot to say about dramatic social and political themes that are almost entirely absent from the rest of the island. But in addition to critiquing the class structure of our society (and considering his own role as an artist / producer of entertainment products), Jonathan Blow is also using The Fortress to present a paradoxical duality. From the first-person perspective of the actual humans living in it, society seems composed of independent individuals who make free choices based on the use of reason and the pursuit of their personal ideas of value and meaning. But from a top-down view of civilization in aggregate, history seems determined by unthinking trends like demographic changes and economic cycles, and people’s beliefs are so heavily influenced by the circumstances of their surrounding environment/culture that genuine independence and meaningful choice seem impossible. These ideas are expressed with clarity and detail through the combination of audio logs, environmental art, and the game design of the puzzles themselves.

A Monastery of Direct Perception

The monastery connects environmental puzzles to the themes of meditative awareness and direct sensory perception. We also analyze the Tarkovsky theater clip!

Just like a real Zen meditation hall, the Monastery in the Witness is all about getting to the truth directly, through immediate sensory perception. To that end, the Monastery’s puzzles are designed (even moreso than the rest of the game!) to constantly remind you of your embodied first-person visual perspective. It is also the place where the puzzle panels and hidden environmental puzzles become the most similar, a reference to the practice of trying to teach and learn the seemingly unteachable skills of meditation. Meanwhile, the area’s ambiguous murals, which can be interpreted in several overlapping ways, remind us of all the top-down sensory processing that our minds impose on raw incoming sense-data, filtering and processing our perception.

Yes, everyone knows that the statue on the peninsula outside the town is reaching for a holy grail while his shadow has paradoxically already grasped the grail. But did you realize that the statue probably represents Nicolas of Cusa, or that it ties together the symbol of the goblet with the Sun, the mountain, and the 8-pointed panel symbols from the mangrove treehouse area? We talk about all this and much more – together, the peninsula and monastery are a Rosetta stone for some common symbols in The Witness.

Why did Jonathan Blow decide that The Witness needed a nine-minute video of a guy walking back and forth holding a candle? He’s not just trolling people with an attention-span endurance test (although that’s probably part of it). The context of the movie “Nostalghia” sheds some light on the multilayered messages that this clip, like the Feynman and Burke videos, is contributing to the game.

Sadly, I’m a bit less articulate when discussing the first-person-awareness side of the game versus the more scientific side. It’s hard to talk precisely about consciousness, so you’ll have to bear with me as I occasionally repeat myself in an effort to find the right words.

Aural Jungle, and the purpose of Environmental Puzzles

I’m terrible at The Witness’s sound puzzles, but we’re doing them anyways! More importantly, I also use this episode to lay out my interpretation of what the “environmental puzzles” represent, and why they are in the game.

The hidden-in-plain-sight environmental puzzles are the most unique element of The Witness, around which the entire game concept was built. In two new episodes of Examining ‘The Witness’, we talk about how the environmental-puzzle mechanic is a game-design metaphor for the specific philosophical idea of non-dual awareness.

Surrounded by some of the game’s most unique Environmental Puzzles, in a vault unlocked by the hardest single puzzle panel anywhere on the island, the Shipwreck contains a fascinating video by spiritual teacher Rupert Spira. In Part 8, we analyze those puzzles, plus reflect on Spira’s inquiry into the fundamental mystery of conscious experience, which he describes in a clear and empirical way that The Witness considers essential.

Many religious traditions have somewhat-intelligent things to say about the core mystery of awareness (Christianity and Buddhism feature prominently in the game, with cameo appearances by Taoism, Islam, and more), but it’s the Advaita Vedanta tradition within Hinduism that gives The Witness its name.

Rupert Spira has many free, worthwhile talks available on youtube and in other places, which I highly recommend. If you are trying to get into meditation, I also recommend the Sam Harris “Waking Up” app. Here too, you get a clear and direct description of what experience is like and how to relate to it, presented in more familiar, ordinary language (rather than Spira’s slightly odd speaking style). But still with much of the engaging philosophical depth, unlike its shallower app-based peers.

Alternatively, get your non-dual-awareness pro tips right from Jonathan Blow himself! In this talk, he describes how to apply some mindfulness-inspired mental techniques to better deal with negative emotions. Here is a very good talk that demonstrates the strong practical benefits of Spira’s philosophy.

There’s nothing like thinking about The Witness, so I’d love to return to this series someday – probably with a series of more casual, even-less-structured videos about various midgame areas, ideally followed by some kind of maestro-level, secret-of-psalm-46-esque sequence of lectures about the end of the game and some of its deepest messages. Beyond The Witness, it would be sweet to make other videos about similarly complex and beautiful games – Outer Wilds, Edith Finch, Braid, and several others come to mind. Who knows, maybe I could set up a patreon or accept bitcoin donations? Until that distant day, deciphering the secrets of The Witness’s other areas will remain as an exercise for the reader!

In the meantime, you might enjoy my commentary on Jonathan Blow’s other game, Braid, such as my four-part essay or my fan-sequel mod that brings new writing, art, and puzzles to the game. You might also appreciate my “Grounding Philosophy” sequence, where I try to lay out my relationship to various underappreciated aspects of the human condition. 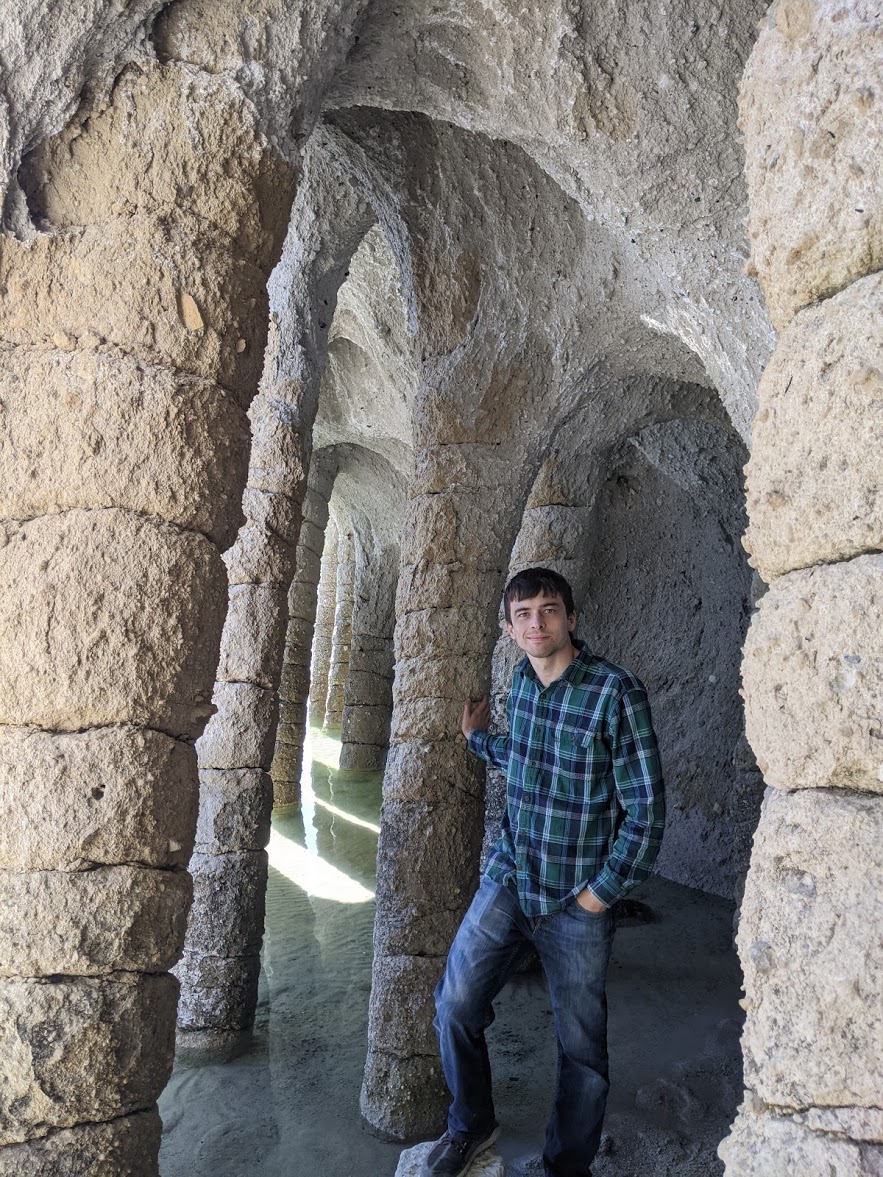