This is the first entry in “Overthinking It”, a series of blog posts where I joyfully read a little too much philosophy and politics into movies of questionable quality. This is distinct from my writing about videogames, where all my analysis is completely serious.

Matrix 1 was about “true reality” versus false simulation. Matrix 4 asks if we prefer nonfiction-style realism versus fiction-style emotional narrative.

Partway through “The Matrix: Resurrections”, Neo’s therapist is revealed to be the villain of the movie and the current controller of the matrix-simulation. The therapist reveals that the matrix-simulation has been re-configured under his new management — instead of aiming for the “fussy facts and equations” of a perfectly realistic simulation of human society, the new matrix-simulation is a deliberately incoherent dream-world designed to stimulate maximum emotional drama by dreaming up dramatic stories and conflicts: “can you catch the bullet in time”?

The therapist explains that the reconfigured simulation has been setting new productivity records — the machines can extract more energy per person, and ironically people are less likely to question the veracity of a dream-world that panders to human psychology than they are to question a realistic simulation of a coherent human society.

In the original Matrix movie, the “human world” of 1999 New York is tinted a sickly green — besides giving the movie a distinct visual style, green is associated with the green text of old-fashioned computers and thus symbolized the fact that the matrix-simulation isn’t the real world. Only the “machine world” has a reasonably even (albeit drab) color balance. The basic theme is something like: “true reality vs familiar illusion”.

But in Matrix 4, the “human world” of 2020 San Francisco is cartoonishly oversaturated — the bright colors symbolize how the matrix has been redone as a narrative-friendly dreamworld. Matrix 4 pretends to be about the original theme of bravely choosing truth over lies, but secretly it is about choosing the colorful emotional drama of human feelings and narrative over the boring technicalities of realism. 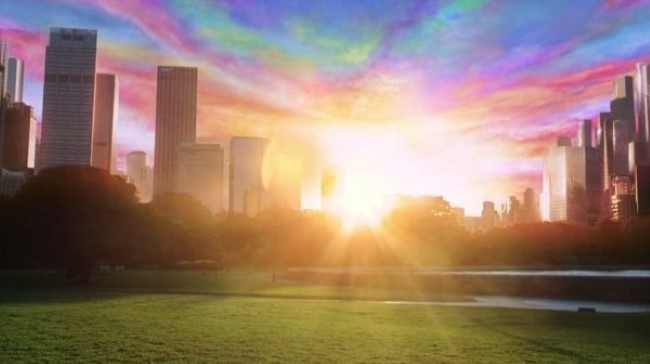 A three-act descent into feelings-world.

Matrix 4 is kind of a three part movie:

Ostensibly, the plot of The Matrix 4 is about Neo breaking out of a prison of illusion and rediscovering the true reality. But the structure of the movie is the opposite of this! It starts out asking real-world philosophical questions and agonizing over issues of reality, authenticity, and truth. But over time, the movie stops worrying about what’s really real, and instead descends into increasingly fictional themes and decreasingly coherent plot events — an enthusiastic embrace of feelings-world. Why would anyone take the blue pill, when the red pill is the obviously “correct” choice almost by definition? Neo’s story shows us why.

Neo himself is understandably so confused and conflicted about what’s real that he’s become desensitized to the distinction between reality and fiction. He’s realized that the much-hyped metaphysical distinction between the “real” physical universe of the machines versus the “illusory” matrix-simulation universe (or the “real” universe of 2020 San Francisco versus the “illusory” imaginary universe of mental illness) is an impossibly difficult question with little impact on his direct experience of life. Like all conscious beings, his only interaction with the universe is via experiences and feelings in his brain. Ultimately, says Matrix 4, the only thing that matters is feelings, whether that means going off your meds and accepting psychosis as preferable to your boring day-job, or breaking out of the matrix-simulation to be with your true love Trinity.

Imagine that Neo is actually just a game designer in San Francisco, and all his ideas about the matrix-simulation are actually just psychotic delusion and escapist fantasy. The real world of San Francisco is samey, boring, annoying, and meaningless. He’s aging and friendless; a potential romance with Tiffany from the coffeeshop is torpedoed by the tedious technicality of her nagging family.

By contrast, in the world of his psychotic delusions he’s the superhero savior of mankind; he gets to fly around and fight people while making new friends and participating in exciting high-stakes missions.

At the very end of the movie, Neo and Trinity have already resolved the main plot stakes, but they decide to show up at the therapist’s house for a gratuitous, emotionally satisfying beatdown of the therapist. There’s no lore reason for them to do this — it’s all about the feelings. To make the beatdown even more satisfying for Neo and Trinity, the therapist (who previously used the nonaggressive, woke language of psychology) takes a bizarre and completely out-of-the-blue turn to become a cartoonishly raging sexist. After their Tarantino-esque revenge fantasy concludes, they literally fly through the air together (dressed nostalgically in their old 90s-cyberpunk costumes) on their way to “paint the sky with rainbows”.

…And you’re telling me this supposed to be a movie about the unrelenting search for truth?? Rejecting pleasant lies and breaking through to a more authentic reality, embracing the cold hard facts even if we don’t like what we find?

No way. This is literally a movie about the opposite: it’s about how facts are boring and overrated, and it’s better to just rock out and do your own thing, videogame style. It’s about the triumph of feelings over reality. So, the Matrix 4 is a celebration of taking the blue pill, choosing feelings over facts. Here’s my big question: is Lana Wachowski making a cynical ironic statement about other people, a criticism of moviegoers who just want soap-opera drama? Or is Lana genuinely embracing this as a personal philosophy? (Remember: most likely neither of these are true, and I’m just reading too much into a slightly incoherent movie. But this is Overthinking It, where it’s more fun to assume that absolutely everything is the result of deliberate authorial intent, so – onwards!)

Personally, I suppose I interpret the movie’s blue-pill advocacy as a mix of both cynical and genuine. Both the complaints about Hollywood shallowness and the narrative of LGBT liberation seem genuinely felt. But surely the movie can’t be saying both “facts over feelings” and “feelings over facts” at the same time! In the end, I think Matrix 4 is giving us a synthesis that goes something like this:

Reality is overrated, since ultimately the only thing that really matters is feelings and experiences in the mind. Therefore, give up on the quest to find the authentic true ultimate reality, which is probably impossible and definitely pointless! Instead, your mission is to make sure that the frame through which you see and interact with the world is your OWN frame, made by you to your own liking, and you’re doing what YOU want. Don’t be a slave following other people’s equally artificial rules and seeing the world through their forced perspective. Yes, wake up sheeple. But instead of waking up from illusion to truth (which is impossible/meaningless), wake up from the slavery of other people’s expectations and roles to the freedom of original self-expression.